Yes, I’m a wheel size agnostic. I like bikes, no matter what wheel size they are. I absolutely appreciate a 29er’s stability and rollover, and I firmly believe that when you get them up to speed, they perform and feel agile – not as agile as smaller wheels, maybe, but not enough to offset their other advantages. So if you’re on a 29er, I’m not saying your bike isn’t fun. I’m just saying 26 ain’t dead. That was a rather long disclaimer, but wheel size debates are heated, so better to avoid any misunderstandings.

Recently, I found myself on the good old 26er more and more. It was just the result of grabbing a bike and going out for a ride rather than a conscious decision, so for a while I didn’t give it much thought. When I noticed, I reflected and wondered what could be the reason. I’ve always been an avid advocate of “horses for courses“ – all wheel sizes have their merits (and shortcomings), and the ideal choice can vary according to terrain and riding style.

I’ve had a little less time riding, recently, and often, I only got to do the classic after-work ride on my home trails that basically consists of climbing a mix of concrete, fire road and singletrack, a brief pause on the top, and a single run down – all in under two hours door-to-door (yes, I am lucky to live really close to the trails). Maybe it is the shorter rides, or maybe it is because one of my riding buddies just got a brand new 26“ bike, but I found the 26er to be more fun for this riding, so I grabbed it, again and again.

I’m still faster on the 29er on most tracks, and there are a few features that I ride with a lot more confidence on the bigger wheels. But when it comes to fun, for me, fun means being one with the bike and feeling the trail. Yes, fast can be fun, too. Confidence can be fun. I’m not saying a 29er is not fun. But on my home trails, the playfulness of a poppy bike equals more fun. I get more feedback, and I am quicker to immerse in the trail and play with it. I may be slower, but it feels faster. I am one with the bike. It is pure.

Now I could have simply taken the goldilocks 650B – and even more so because it is not the middle ground, but much closer to 26“ than it is to a 29er. In fact, I’ve heard from a lot of people they can’t feel any difference between 26“ and 650B, but I must say I do. When switching from 26“ to 650B, I feel a noticeable rollover and stability benefit, and a slight loss of agility. Again, horses for courses, and there are some things about 650B that I really like. But when I’m out for that after-work ride, I don’t take the 650B for the same reasons I don’t take the 29er. I’m not a middle-of-the-road type of guy. I want the real thing, and why compromise on trail feedback and agility, when agility is what I am after?

When presenting his bike for Crankworx Les Gets, Rampage winner Andreu Lacondeguy just said “I’ve got a custom rear end so I can keep running 26 inch wheels that are actually way better than 27s“. I’m not sure I’d agree for all situations (like long backcountry epics or racing), but for my after-work ride, I feel exactly the same.

Don’t take this as another die-hard 26er’s rant. I still believe in horses for courses, and I am not selling my other bikes. But I am not selling my 26er, either. In fact, I am writing this not only hoping that we’ll have 26″ wheels, tires and forks for years. I’m also writing this because I hope the industry guys don’t forsake 26“ forever and give us a new generation of fun freeride bikes. So if you’re a designer, and you’re thinking about a playful, ~180mm 26“ bike, I just want you to know: you have a customer here. 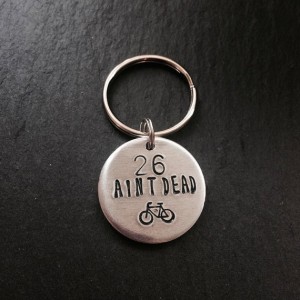 .Image from Elegance and Memories (at Etsy) where you can actually buy the handcrafted keyring (no affiliation).