If your favorite day is spent riding a mountain bike, chances are you’ve not drooled over algebra and trigonometry in school. But hear me out, because as a rider, you really need Pythagoras.

Until a few years ago, we’ve measured bikes based on two numbers: Seat tube and top tube length. That made some sense for seated pedaling, but not for descending, when fit matters most. Arguably, advances in bike technology had an impact on this, because for a long time, the mountain bike was a pretty focused affair: If you enjoyed the descents you had a downhill rig which was a pain to pedal up. Unless you happened to have a lift-accessed area nearby, chances are you spent a good part of your weekends pushing your bike up the hill. If you were the endurance type rider who liked climbing, you’d had a XC style bike with steep angles that flew upwards, but required finesse and a firm hand on the brake to go down rougher terrain. Yes, people put meatier tires on and lowered their seat posts, and some still ride terrifying terrain on a XC hard tail. But with XC world cup racers embracing full suspension, dropper posts and slacker head angles, we don’t have to really argue about whether the XC bike is a good fit to maxing out fun on the descents. There was little in between, and even though Freeriders ripped downhill in remote areas, their geometry and weight did not make them all-around bikes, unless you did not mind forcing 40 lbs up the hill, with your knees hitting the bar.

The advent of the trail bike – and later, the Enduro bike – changed the game: Riders were able to climb to the top and descend at almost downhill pace. Many dedicated downhill riders have added an Enduro bike to their stable, only to find their trusted downhiller now catches dust in the garage. Lower weight, quality suspension and parts durability all played a part in this, so the trail bike is not only about geometry, but without modern geometry, it would not work as well.

That’s when reach (and stack) came into play, first introduced into mountain bike geometry tables by Turner and Transition. As you all know, reach measures the horizontal distance from the BB bracket to the top of the head tube. It was introduced to give an indication of the room you have when in a standing position. Along came stack, which is the vertical dimension from the BB to the head tube. It tells us how tall the bike feels. 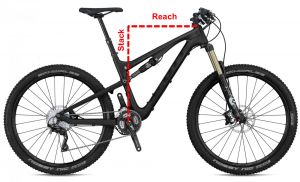 On the various internet forums which are sprawling with people asking whether they should go medium or large on their new bike, reach has quickly replaced top tube length as the main argument. And to be fair, it is a very important, maybe the most important single figure. But we all know bikes are not single elements, but the sum of all parts, and maybe even more so when it comes to geometry. People focusing on reach often forget about stack, and it is a rare occasion that someone puts forth a reach/stack equation in a geometry discussion (as an indication of how long/slack a bike is). People became so obsessed with reach, that they took it out of context.

Those who don’t care about stack in their geometry discussion sometimes argue that effective stack is affected by axle-to-crown, bar rise, spacers – but so is reach. And reach without stack does not tell us what we really want to know: Whether we can ride a bike with our favorite stem length without feeling too cramped or too stretched out. That’s because two bikes with identical reach measurements can feel pretty different, even when you put the same cockpit (bar & stem) on. That’s because one bike’s stack might be tall, and the other one’s low. So why are we leaving stack out of the equation when discussing bike fit?

Maybe because it is unwieldy. How does one set of reach and stack compare to another? That’s where industry could have been nice and done the math for us, because it is simple:

And this may sound like a bike nerd’s wet dream, but it is immensely useful for bike fitting. Because what we are actually looking for is not reach, or stack alone, but the distance from BB center to the top of the head tube. And if reach is a in the equation, and stack is b, then c is this measurement – for simplicity, let’s call it space. 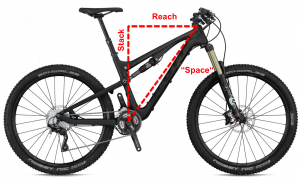 Now you’re right telling me that this is no stroke of genius. It is a straightforward figure. But it is not present in current geometry discussion, which often focuses purely on reach alone. I think that if designers gave this number alongside reach and stack, it would be easier and much quicker for me to decide how well a bike would fit me out of the box and what kind of adjustment my cockpit might need. Of course, I could do the math myself. Let’s look at some bikes I have spent some time on:

A Specialized Enduro, size large, the good old 26er. If Specialized’s geometry tables are to be trusted, its reach number is 457mm, and the stack is 585mm. So space would be about 742mm (we’re dropping the fractions because we like to ride bikes and not drool over decimal places).

I recently had a test ride on a 2016 Stumpy 650B, and despite the bike’s longer reach, I was surprised it felt shorter than the 29er Stumpy. Reach alone was misleading here: The space number is 751mm, more than an inch smaller than on the 29er – that’s about the same as adding a ton of spacers, mounting a riser bar or stepping from one frame size to another.

Now there are still a lot of factors coming into play, and this space figure can’t solve all of them. Don’t be surprised to find that two bikes with identical space numbers still ride differently. After all, the bike is the sum of its parts.