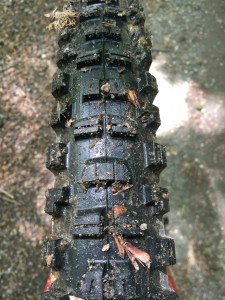 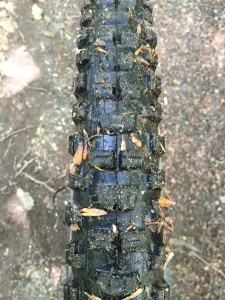 Minion DHR II – the designation stands for the classic Minion DownHill Rear tire, revised version (II). The DHR II’s predecessor, the DHR, was widely considered a sub-par choice compared to the all-time favorite DHF (“front”). The DHR II, however, was an instant hit. With its stout side knobs, courtesy of the Minion DHF, it provides ample cornering grip, and its square center knobs bring another level of braking traction to the trail. With rolling resistance more than acceptable, what’s not to like?

Nothing. In fact, the DHR II is so good that I like to ride it on the front, as well. Why not take the DHF, you may ask? Maxxis certainly knows a lot more about tires than I do, and if they decide to give their tires designations like “front” and “rear”, you might as well stick to the advice, right?

Not exactly right, in this case. But let me explain:

DHR II as a Front Tire

The original, 26″ DHF 2.5 is an old design and pretty narrow by today’s standards. It is a good tire with a great profile, but against a true 2.5 tire, it looks like a poor little thing. Its ETRTO 55-559 sizing indicates it should run about 55mm wide – that’s smaller than the company’s newer 26″ DHF 2.3 and smaller than the DHR II 2.3 at 58-559 – whereas the 26″ DHR II 2.4 measure 61-559. So going for a DHR II over a DHF is a smart choice if you’re on 26″. I’ve been riding the DHR II 2.4 on my 26″ bike for several years now, enjoying its ultra grippy SuperTacky compound on the front and 3C MaxxTerra on the rear. It is an awesome combination for dry to intermediate conditions (where the Shorty is the better choice), and I especially value the braking traction it provides.

Recently, Maxxis not only introduced a couple of really big tires (Highroller 2.8, anyone?), but has gone wider on its classic tires, as well, in combination with their Wide Trail design to have the tire profile better match the wider rims many riders are running nowadays. Maxxis adds the sweet spot for Wide Trail is around 35mm internal width, but I found ~30mm to be a very good fit. So we now have tires like DHF 2.5, Shorty 2.5 and DHR II 2.4 for 650B and 29er, and, with the exception of the DHF, for 26″, too (thank you, Maxxis). As said, the 26″ DHF 2.5 is still the old, narrow design, but on the other wheel sizes, you have free choice to go wide with each of the three.

Does that imply running the DHR II on the front is just a workaround, because a wide trail DHF is not available for 26″? Is 26″ the only wheel size to run a DHR II as a front tire? Not necessarily. In fact, depending on the capabilities you are looking for in your front and rear tire, you might rather want to put the DHF on the back and the DHR II on the front of your bike.

Compared to a same-size Minion DHF, the Minion DHR II offers roughly the same cornering grip, but significantly better braking traction. On the other hand, the DHF has better directional stability and rolls a little better. So it really depends on what type of limit you want to push: If you’re going for outright speed on faster trails, the DHF is probably the better choice on the front. But if you want to push the edge in super steep and technical terrain, I think you should try the DHR II. The braking traction nicely supports whatever front-wheel braking you can afford to keep in control. The steeper and more challenging the terrain, the less useful your rear brake gets – and when it gets really nasty, your front brake is the only thing between control and crashing. That’s why I believe the DHR II is even more valuable as a front tire. The DHR II works wonderfully as a rear tire, too, offering plenty of cornering and braking traction in all situations. But if you care a lot about rolling resistance, want to run a similar profile on both ends and don’t mind the occasional question by a fellow rider, try mounting the DHF on the rear and the DHR II on the front. 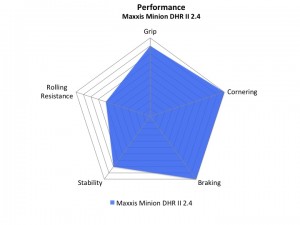 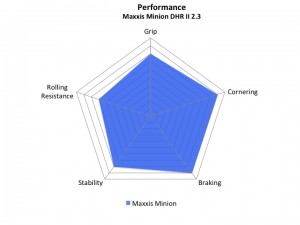 Grip is amazing – the sturdy profile has you finding grip where you thought you’d skid and slide at best. The DHR II is a tire with wide limits, one that provides plenty of control, and even though its boundaries are defined, it is a good-natured, well-meaning tire that will not let you down when you’re riding on the edge. The 2.4 has bigger knobs and takes an already excellent tire one step further into gnarland.

The DHR II got the DHF’s famous side knobs, so it comes as no surprise that it corners on rails, just like its bigger brother. Everybody who has been running the DHF for a while has grown accustomed to the pleasant feeling when the side knobs hook up. One moment you felt you might lose it, the next you’re firmly in your comfort zone. Cornering on Minions has always meant control and confidence, and the DHR II wears its Minion badge with pride.

This tire shines everywhere, but braking is the DHR II’s forte – here, it outperforms most other tires, including the legendary DHF. The 2.3 offers outstanding braking traction, but the 2.4 takes it to another level. Especially on the 2.4 version, braking is like throwing an anchor. Where you’ve previously lost traction, the DHR II lets you know you’re not even close to the edge, with ample braking power at the tip of your fingers. Running a 2.4 on the rear seriously changes the way your tire breaks away – in that it doesn’t, mostly, and you better have an equally capable tire on the front. If you like to slide your rear a lot (you shouldn’t, for the trails sake), this is not your rear tire.

The DHR II is long-lasting and the EXO casing is sturdy enough for most uses. If you’re shredding super rocky terrain all week, you should think about a wire bead casing tire, but I had very little flats or punctures, and I’ve used almost a dozen DHR II tires on different bikes. The casing is not as comfortable as some others out there, but it works well. As always, Maxxis tires were easy to set up tubeless (whether they carry the TR designation or not) and not prone to burping.

It is really just fine, in my opinion. I’m used to running a lot of tire, so you might differ. But considering its capabilities, the DHR II is still fairly lightweight. It may roll a little worse than the DHF, which means it probably rolls a little worse than your current rear tire, but you’ll likely get another level of braking and cornering, as well. In any case, it is worth it.

As a 650b, the 2.3 tips the scales at 790 grams, a very respectable weight taking into account its capabilities. The heaviest folding bead casing DHR II is the 29 2.4 at 955 grams, still a tire that I’d not consider heavy for all mountain use, especially given its agreeable rolling resistance. 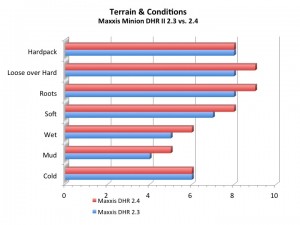 As a rear tire, I’m running the DHR II in both widths throughout the year, unless there is a mud fest. On the front, I’d trust the 2.4 most of the year. It finds its limits only when the ground is soft, deep and loamy, when most tires utterly fail and you’re wondering whether you should mount intermediates or true mud tires. Everything else, from rocky terrain to soft forest trails, the DHR II handles perfectly fine. It is a real all purpose tire that you can take along for long backcountry rides, as well as more descent-minded days, and a wire bead casing is available, as well.

Tim’s Take: The DHR II is exactly what most riders are looking for in an all-round, all mountain and enduro tire: Amazing grip, outstanding braking traction and reasonable rolling resistance, all in one sturdy package. In the 2.4 width, you get bigger knobs, too, so it is a formidable front tire, as well. Outside the wet season, there’s little reason to look elsewhere.