Review | Specialized Enduro 29 with 650B Enduro Yoke – A Better Beast?

Why would you install a 650B Enduro yoke on a Specialized Enduro 29? It could damage your frame, void your warranty and ruin your ride – it better be worth it. Find out if it is, and who’s it for.

A lot of people ride stock bikes – they buy a bike and ride it, changing little – tires, stem, or saddle. From a resale value, that’s actually not a bad idea. But from a fun perspective, it is nice to see a bike grow over time. Some of us simply never tire improving their ride, while others are tinkerers, who do it for sake of doing it and finding out if it works.

A couple of Specialized employees and factory riders were first seen on Enduro 29er bikes with a 650B yoke installed. Others followed and said it transformed the ride. Soon, word of mouth spread and created an unusual demand in 650B replacement yokes. Eventually, Specialized started asking for 650B frame numbers before accepting orders and pointed out that if the 650B yoke was to be installed on a 29er Enduro, it would void warranty.

Important note: This is a report on my experience. I’m not advising you to modify your bike. This could void your warranty and possibly cause injury, or worse. Consult your local bike shop before making any changes.

The E29 is an award-winning bike that’s widely considered to be one of the best mountain bikes ever made – so why would you want to mess with it? In fact, I didn’t. I still think it is the ultimate one-quiver bike, and even though bikes have been getting slacker in the past two, three years, the E29 still holds up more than well. After hearing about the 650B yoke option, I was in no hurry to change my favorite bike. But it had started an idea. What if the best bike could become even better?

I’ve been thinking about the Enduro’s successor, the 2017 model, for quite a while. Part of the motivation was that it would be high on the list for my next bike purchase. But an equal part was reflecting on the challenge Specialized faced in improving an already awesome design. I thought about what would I change if I could influence its design? What would my wish list look like for the E29?

With the 2016 Stumpjumper’s head angle now on par with the E29, it became clear that the next Enduro would become more of an Enduro race bike. After riding the new Stumpy (review coming soon), I felt that the Enduro’s edge got smaller. The bikes still have a different character, but the Stumpy caught up on the Enduro – so if I could turn my E29 more into what I want from the next model, I could have my cake and eat it, too: I’d differentiate it from the Stumpy and by doing so, it would hopefully become more like I the 2017 Enduro. And if the remaining gap would be small enough, it would possibly even save me the expense of buying the new model.

That’s when I decided to try the yoke. Here’s what I found: 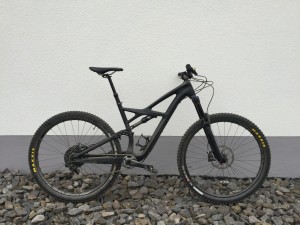 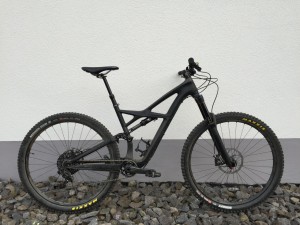 It clears, but there is not much space on my large frame with the stock shock installed.

Removing all air from the shock and simulating a bottom-out, there is about 2-3 mm left between seat tube and seat stay bridge. On a hard bottom out, flex could cause contact with the seat tube. I’d strongly suggest trying this and possibly adjusting your shock to reduce stroke. 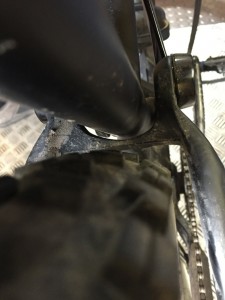 There are various reports on the forums from people with stock shocks and non-stock shocks on frames of different sizes. Whatever they say, what may work for one rider might not fit on your bike. Mine had small, but sufficient clearance, but when I deliberately cause seat stay flex, it can really close to contact.

Seeing Specialized employees experiment with their bikes is an interesting indicator of potential improvements to a bike. Adding flexibility in terms of shock and yoke combinations could have been one of the reasons why Specialized got rid of the seat stay bridge on the 2016 Stumpjumper – another being tire clearance.

Even looking at the bike, you can tell the difference, but I can’t provide any exact measurements here. I’d sum up the changes as follows:

Yes, I have to say I can feel it. The seat angle is a bit slacker, and this positions the rider more over the rear wheel. If you have a shorter inseam, it might not be an issue, but to me, it was noticeable. Overall, the bike seems lower and more planted, and I did not find the front to rise earlier on steep climbs. But even with the saddle adjusted, pedaling is not as good as before. That said, the E29 is still a very good climber, just not outstanding anymore.

Rock’n’Roll, Baby. The yoke affects all aspects of descending, in a good way: Stability is improved, both at higher speeds and in steep terrain. Cornering is significantly improved, with better traction and calmer handling.

To me, the most important aspect is that the center of gravity seems lower. I don’t know how much lower the BB actually is, but I can definitely feel a change in how the bike rides. I felt lower and much more inside the bike. I’d attribute this mostly to the lower bottom bracket and larger bottom bracket drop. In steep terrain, the reduction in head angle plays a role in adding stability.

The faster and more challenging the terrain gets, the bigger the benefits are felt. If you’re racing or riding park, I’d safely say this could be a game-changer for you.

Slow speed maneuverability takes a slight hit. On slow features, the bike requires more rider input and feels slightly sluggish in comparison. The slower and more serpentine the trail, the stronger the effect was felt. And unless you go really, really fast, in tame terrain, the benefits are not as pronounced – or, to put it another way: The standard E29 is so incredibly capable right out of the box,  most of the riding on tame terrain is not even close to its limits – so you’ll probably not see big benefits. If you often ride the E29 on tame terrain, you’d want to carefully evaluate whether the added stability is worth it to you – especially if your trails are of the slow, winding, tight type.

Tim’s Take: If the E29 was my one-quiver bike, I’d probably revert to the stock link. For a lot of my riding, however, I take my Stumpy, and reserve the E29 for heavy duty, with wider, sturdier tires – and the yoke helps to further separate the two bikes. For a rider who takes the E29 to the park even semi-regularly, this is a must-have. If you prefer the E29 as a do-it-all trail bike on steroids, chances are you’ll like it the way it is.

Related: Specialized Enduro 2017 – What can we expect?

Eagle Has Landed – SRAM Eagle 1×12 is Here in Gold