Recently, what looks like a Specialized patent drawing appeared and was claimed to show the upcoming Specialized Enduro 2017 frame.

The picture appeared in various online forums and immediately, speculation ran wild, with users wondering whether this is the first leak of the new Specialized Enduro 2017 frame.

Here’s why I think this is not the case: 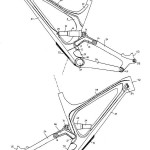 What I think the 2017 Specialized Enduro will be like:

In a recent article, I’ve talked about what I expect from the 2017 Enduro in more detail.

The Elephant in the Room…

… is Boost, obviously. I’m not sure whether Specialized will add a 6Fattie / 27.5+ option. On the one hand, Boost is coming and we see it on more frames, including 650B frames, such as the new Ibis Mojo 3. Certainly, fork manufacturers will want to avoid producing the same fork in non-Boost and Boost, so we could see 100mm forks being phased out even on bikes that don’t benefit from Boost that much. On the other hand, Specialized has only recently introduced the Stumpjumper 6Fattie, and might want to wait for feedback from the market. They admitted they are still in the learning curve regarding 6Fattie / 27.5+, and I think this also applies to the industry in general, with some manufacturers designing Plus sized bikes around 3.0 tires and others focusing on 2.8 tires. Tire-wise, the standard is still in its infancy with mostly thin and low-profile tires offered. For Enduro races, Plus tires would need reinforced sidewalls to protect against flats and help stability in rough cornering – which would make them heavier.

It is not impossible, but I don’t think Specialized will resort to flip chip tactics like Santa Cruz did with the new Hightower. Specialized has a tendency to design for a focused purpose and try to achieve the best possible result for that one application. But the Enduro’s longer travel opens another option: With sufficient tire clearance, the 29er frame could serve as the basis for both 622 (29er) and 584 (650B with plus tires). In fact, the current Enduro 29er readily accepts 2.8 tires. So we might see a Boost rear triangle and Boost forks, and then Specialized could offer models in their lineup as a 6Fattie right from the factory.

Whatever the 2017 Enduro will look like – if the amount of speculation on the forums is any indicator, it will be an exciting release that many riders are waiting for.

Related:  Specialized Enduro 2017 – What can we expect?