Here it is: A first spy shot of the new Specialized Enduro 2017 has appeared. 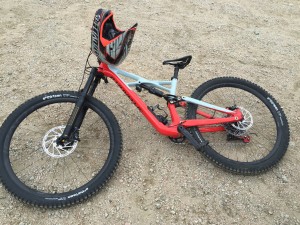 After months of speculation about the new Specialized Enduro 2017, it seems a first spy shot has appeared. The new Enduro seems to fulfill most people’s expectations:

With the official launch on Crankworx Whistler only a few days away, it is not a huge surprise that the picture emerged.

I think it is a smart move from Specialized to keep the Enduro’s iconic X-frame design. Earlier, there was a viral campaign based on a leaked prototype drawings that showed an asymmetrical frame. These were later admitted to be fake and just photoshopped from the Specialized Demo 2016 frame.

The next evolution of one of the most famous Specialized bikes won’t be a huge surprise, bringing us a lot that was expected (e.g. SWAT Door, Boost, internal cable routing, Öhlins suspension, SRAM Eagle 1×12), except for the move to a threaded / BSA bottom bracket, which is a departure from the pressfit PF 30 BB that Specialized have sold us before. What’s missing is a longer Command Post dropper, and I think Specialized needs hurry up to keep up with longer posts such as 9point8 FallLine (150mm / 170mm / 200mm) or RockShox Reverb (150mm / 170mm) – a 150mm option should be a minimum.

The Enduro 29 was a super successful bike, and while racers found the head angle too steep, many riders enjoyed the versatility of a long-legged trail bike. In light of the Enduro 29’s heritage, it is a good decision to build upon its strengths with a more modern geometry rather than introducing a revolutionary redesign – all the while Peter Denk is probably working on the 2020 Enduro right now.

Looking at the numbers, it comes as a surprise that Specialized increased reach only very minimally (about 5mm), and that the BB height on the 29er has not dropped (especially in light of the 170mm cranks), since this has been a recurring comment from riders. As a result, the 2017 Enduro’s BB drop is not big, especially compared to its little brother, the Stumpjumper, which sports a whopping 36mm BB drop (in 29) and 18mm for the 650b. Some riders had also asked for slightly longer chain stays and preferred shorter fork offset (i.e. 46mm over 51mm – Chris Porter suggests this). Stack is a bit lower on the E29, but this is a lot easier to remedy if you prefer a higher cockpit.

The steep seat angle (76° on M and L sizes) should make it comfortable to use longer travel forks, and Curtis Keene seems to be riding a 170mm Lyrik for this weekend’s Whistler Enduro World Series event.

The Enduro comes in the following models:

What I’d like to see in addition is a new freeride bike from Specialized, a successor to the Specialized Enduro Evo, and I still hope we’ll see this coming.

(I’ll update this post later on. I’ll also follow up with a review / ride report of the new bike soon).

Review | Schwalbe Hans Dampf: Jack of All Trades or Master of None? | Ride Report