The Specialized Enduro has always been a category-defining bike. Its first iteration dates back to 2000, long before the Enduro World Series. Since then, classic mountain biking – riding up and down mountains – got „Endurofied“ to the extent that we now have Enduro backpacks, Enduro helmets, Enduro goggles and much more. Some of it makes sense, some not so much.

Back in 2013, Specialized introduced the Enduro 29er (or simply E29), a game-changing design that demonstrated the potential of long travel 29ers. With its short rear center and a wheel base on par with its little brother, the 26“ Enduro, the E29 rides like a trail bike on steroids and corners on a dime. The stability the big wheels add means it can handle the rough stuff, too. From long day rides in big mountain terrain to Enduro racing and trips to the bike park, this is a true do-it-all-bike. 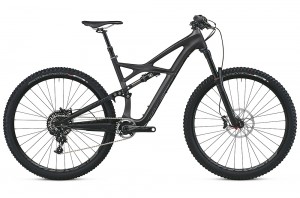 Specialized frankly stated they find the 29er to be the superior platform, offering advantages in stability and grip, while losing only a little of the playfulness of the 26er – if the geometry is done right. In their view, there was no need for 650B, and they came late to the party with their 650B Stumpy FSR and Enduro models. Both were criticized for using existing front triangles, and even though riders have reported no big issues, the bikes were considered a catch-up move, and Specialized was expected to come out with new models a year or two later to synchronize the cycle for 29er and 650B. After the Stumpy got its full redesign for the 2016 model year, it’s the Enduro’s turn for model year 2017. Recently, Specialized has hired Peter Denk, who has worked for Cannondale and Scott before and is known for his special suspension designs (pull shock). But given the long development cycle, it is not clear whether he came in early enough to have a big impact on the fundamentals of the redesign.

Wheel sizes
Specialized spins the wheel size debate with 29 is the fastest, 650B is the most fun, and 6Fattie offers the most control. The real wheel size question for the Enduro is if it will come as a 6Fattie. With the Stumpjumper 6Fattie, they have a first full suspension Plus-size model out, and it is not unlikely that they will test the waters before they introduce more models. Specialized recently admitted they are still working on the best geometry for 6Fattie bikes. They also emphasized that three wheel sizes is a lot of choice, which can be confusing or force a lot of test-rides – and for the shops to stock. So I’m not sure we’ll see a 6Fattie Enduro this year, and I’m not really sad about that.

The 29er, on the other hand, is a classic, and a bike that’s not only loved by riders, but also admired in the industry. It received rave reviews and still gets a lot of coverage in the media and forums. It would not look like a smart move to discontinue a model that has become a category-defining bike. And the 650B, of course, has become the goldilocks standard, and is guaranteed to be continued.

Capabilities
With the 2016 redesign, the full range of Stumpjumper and Camber are „Evofied“ now, and more capable than ever. One reason for making all models Evo was the progression towards slacker bikes and more travel. But people have pointed out that Evo and non-Evo were pretty close, possibly to the extent that deciding between an Evo Camber and a non-Evo Stumpy wasn’t that easy. With that in mind, we can expect the Enduro to be distinctly different from an „Evofied“ Stumpy. It will probably be slacker, longer and lower, with more travel and more sophisticated suspension. If I had to sum up what I expect the 2017 Enduro to be, in one word, I’d call it „racier“.

Geometry
On the E29, a change in head angle seems to be a safe bet. When the E29 came out in 2013, 67.5° was considered slack for a 29er. Now the E29 shares the head angle with the Stumpjumper 29, and some bikes are even slacker. Looking at the Specialized line-up, you can see that the head angle drops a degree with each model.

I think having only 0.5° head angle difference from 29er to 650B is another indicator of how confident Specialized are in their 29er platform, emphasizing the added stability. On the Stumpjumper FSR 650B, 67° is a middle ground head angle in its class. If you follow the logic of the models’ head angle progression, the 650B Enduro would be 0.5° slacker than the E29.  But would a 650B Enduro offer the necessary stability in the steep with a 66° head angle? And would it be seen as a leading-edge design when bikes have become slacker? Probably not. Enduro bikes have recently seen a progression towards racing, with head angles becoming slacker in the 65° range. With Enduro World Series winner Jared Graves joining the team, Specialized will want a competitive bike.

In terms of reach, Specialized has been on the longer end. Recently, many companies have increased reach, and some quite dramatically (e.g. Mondraker). I expect Specialized to increase reach slightly, but not by a huge margin.

Short chain stays are a trademark of Specialized bikes, and I wouldn’t expect them to forsake their philosophy. Short chain stays are also very popular, and proponents point out that cornering, technical climbing and descending can benefit from short chain stays. A lot of people are explicitly looking for short chain stays when making their buying decision. Some are not so enthusiastic, however, arguing that short can become too short, resulting in compromised downhill stability and a rearward weight bias.

So where’s Specialized in the chain stay debate? Obviously, they prefer them short, but it is interesting how they designed the Stumpjumper and Camber who share the same frame: The 650B sport a super short 420mm rear center, putting the focus on playfulness. The 29ers have 437mm rear center, like the Epic World Cup. We know they could have made it shorter without needing Boost, as they’ve shown with the E29, but maybe they found that 437mm offers a good combination of stability and agility. Riding the Stumpy surely agrees. Currently, the E29 has 430mm stays, and the 650B model has 422mm. Arguably, both are somewhat short if you want the stability for racing. Jared Graves comes from a bike with rather longish chain stays (442mm for the SB6C), and with a playful Stumpy 650B at 420mm that could also see use on some courses, maybe Specialized will extend the rear center a bit. That may be a problem for marketing, but could help balance the bike.

Even though stiffness is adamant for an Enduro bike, I’d say it is safe to assume the Enduro gets the SWAT Door. Specialized invested a lot into this feature, and it would be a surprise not to see them include it on most, if not all new designs. This also adds about 200g to the frame, which I find pretty negligible, but weight weenies will disagree. Perhaps they’ve found a way to reduce weight somewhere else or we just have to get accustomed to bikes not getting lighter anymore.

As the bike gets racier, with the slacker head angle, the wheelbase will probably grow both on the 29er and the 650B. Sure, the E29 might lose some of its heavy-duty trail bike appeal, but the trend is towards slack geometry with less travel, and the Stumpy 29er can fill that role well enough. For those who need that much travel, the added stability may well be a boon rather than a setback.

Some riders felt the Enduro’s bottom bracket sits a touch too high, and for an overall slacker bike, Specialized may decide to lower it a bit.

Overall, I hope the Enduro retains its specific frame and does not join the Trail Chassis that the Stumpy and Camber share. Why? I think the Enduro is an icon, and I think three models sharing frames is not a good idea for a premium brand. I believe people want bikes to be distinct.

Travel
I think it is safe to assume that the 650B version will have 170mm travel up front. And with the 650B Stumpy having 150/150 and the E29 sporting 155mm in the rear, Specialized might choose a 170mm shock on the 650B Enduro to further differentiate the lineup. The E29 will probably stay at 160mm up front, which also happens to be the maximum travel for a 29er Lyrik and at 155mm rear because it is a logical step from the Stumpy 29er.

Parts
Öhlins STX 22 air shock and RXF 34 fork on the S-Works models. On the Expert model, we’ll see the Öhlins shock, too, and either the Öhlins fork or the Rockshox Lyrik. The other models are likely to have the Lyrik and a Rockshox Monarch or Fox Float DPS.

It would be nice to see Carbon rims on the Expert model, but this might be an important upselling opportunity, so we’re unlikely to see this.

On the brakes, Specialized has mostly been mixing SRAM/Avid and Shimano in their lineup, with an occasional Magura spec. Personally, I really like almost everything about the Magura MT7, except for the lever (that’s why I’m running them differently). I’m not alone in this, but maybe they’ll spec Magura on some Enduro models. It may be worth it for the stopping power.

On the seat post, most models will have the command post with the SRL lever we all love so much that we are retrofitting it on our bikes. The bad news is that most likely, the post will still have 125mm only. Specialized, if you’re reading this, please bring us a 150mm option that we can upgrade our existing command posts to.

(Update:) With the advent of SRAM X01 Eagle 1×12 drivetrains, Specialized will want to specify the latest one-by technology on their top S-Works offering.

Timing
I guess it will be a mid-season release, possibly as early as the Sea Otter Classic in April.

Anything else?
In the past, the Enduro lineup included the Evo. With 180mm travel, the legendary SX Trail’s successor catered to the freeride crowd, and was an ideal park bike that you could also shred on your local DH tracks. At little over 14 kg, it was still a lot more pedal-friendly than a true DH bike, which made it an ideal one-quiver bike for the more gravity-focused folks. Some people maintain that such a bike would best be put on 26“ wheels, and even though I see the charm of it, I believe it might be too early for a 26er freeride revival. But it is a bike I’d like to see.

Update: Recently, what could be a Specialized patent drawing leaked, and is claimed to show the 2017 Specialized Enduro. Read why I don’t think this is the case here.